‘Kalamshu’ is an organisation established for promoting art & cultural development in general. ‘Kalamshu’ meaning, rays of art, signifies the spread of artistic enlightenment. After a humble beginning, we slowly expanded our activities. We aim at preservation, presentation & promotion of art & culture of our country. In doing so, we also try to reach to economically weaker sections of the society, mentally & physically challenged, creating an environment for them to develop interest & pursue art.

‘Kalamshu’ has transformed into an institution of good standing with growing reputation, more specifically, in the field of dance and music. We have been in the field for nearly 12 years with many sponsored programmes all over Karnataka on prestigious platforms, We have built up a good image in this locality and outside, and well established in this field.

Besides cultural presentations, we engage in art education & art promotion through activities/shows/programs. We have in common – 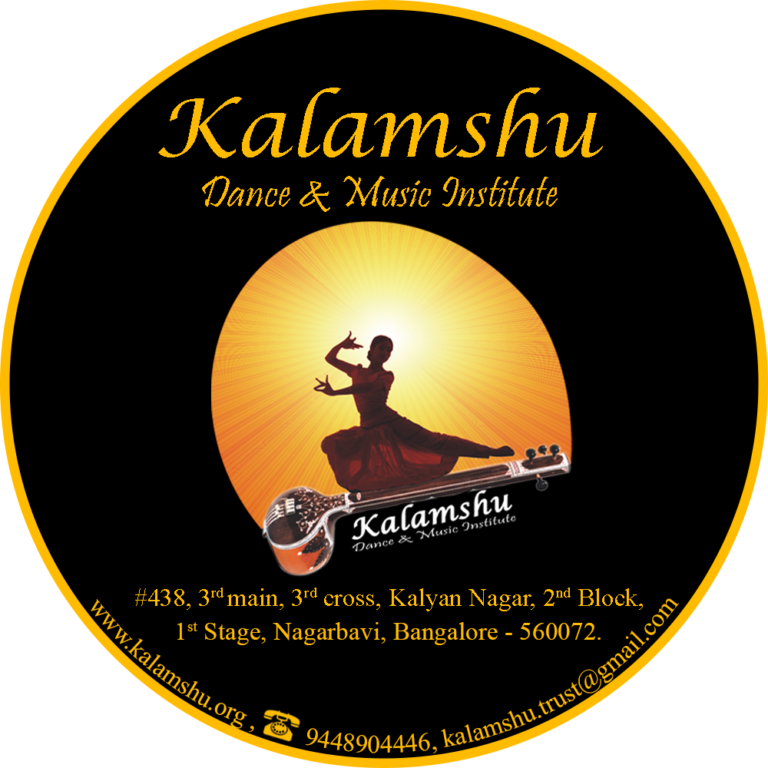 ‘KALAMSHU’ dance & music institute was established as a realization of long cherished dream of U J Kunikullaya family in 2005. It is the brain child of eminent Guru, Vid. Smt. Supriya Hariprasad, founder director of the institute. ‘Kalamshu’, meaning the rays of art, signifies the spread of artistic enlightenment. It is not just an institute but a mission to prepare & unveil the artistic talent of its disciples, along with nurturing their flair for creativity and achieve mastery over the craft.

‘Kalamshu’ operates out of two locations: 1) Kalyananagar, Nagarabavi 2) Saraswathinagar, Vijayanagar, Bangalore. The present emphasis being on dance & music, hundreds of aspirants receive training under this umbrella in both the art forms under able gurus, Vid Smt Supriya Hariprasad (in dance) & Dr. Kirthana (in music). Dr. Smt. Kirthana Kunikullaya, heading the music wing, is extending valuable share of her contribution as Asst Director, to the success of this venture and Sri. U J Kunikullaya is providing creative guidance to the total functioning of the organization.

The spectrum of activities at ‘Kalamshu’ may be summed up as follows:

The beginners who enter the institute with the infirm footings are groomed into able performers. Those who faced the exams were out with distinctions under the guidance of the gurus (100% results all these years).

Kalamshu has been in the field for over a decade with many sponsored programs all over Karnataka & outside on prestigious platforms.

Many other activities are pursued through ‘Kalamshu Cultural Trust’. The name ‘Kalamshu’ itself has art in its veins, which flows through its repertoire. With every passing year, ‘Kalamshu’ intends to expand to other fields of performing arts and geographical presence. 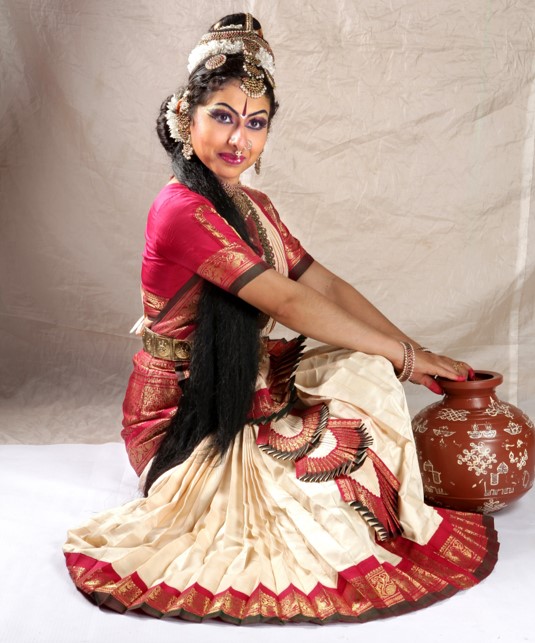 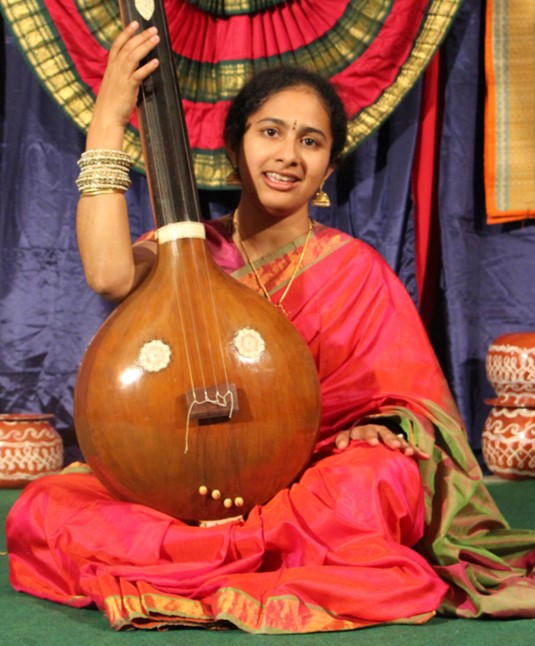 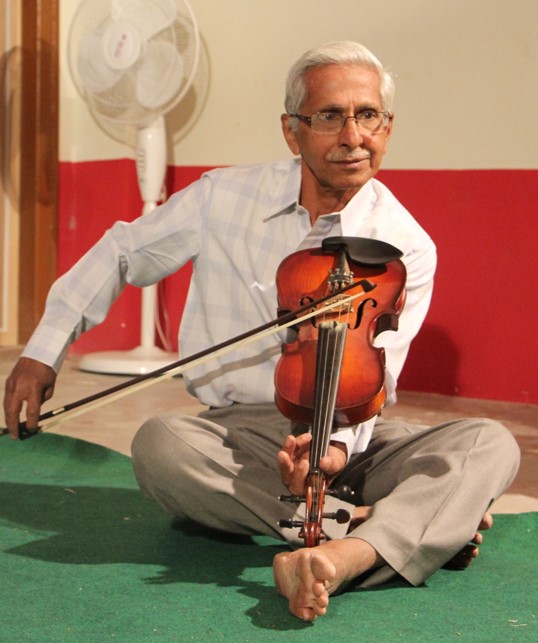 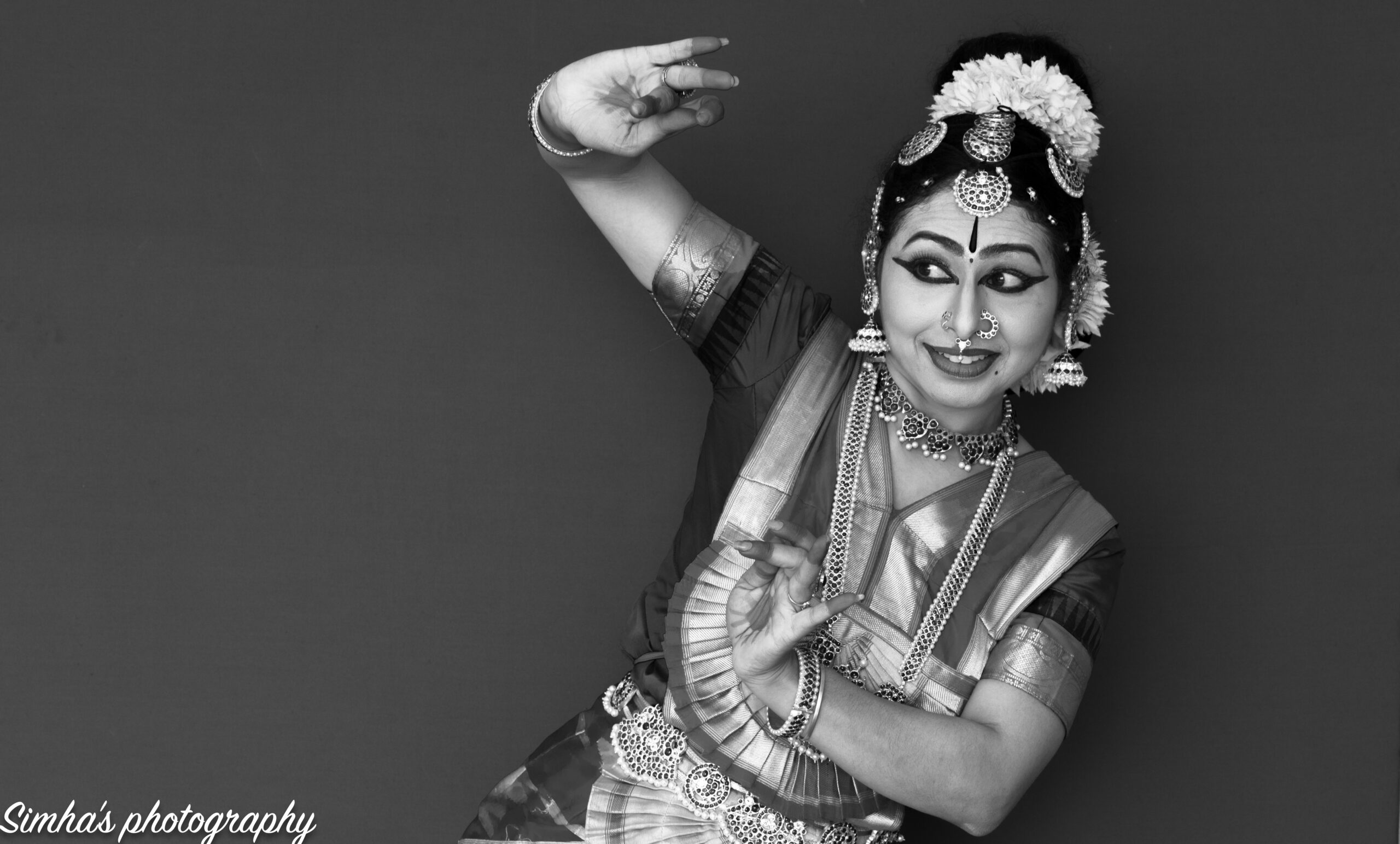 ‘Natyamayuri’ Vidushi Supriya Hariprasad is one of the most promising and finest danseuse and gurus of the Pandanallur style of Bharatanatyam. She has been an active contributor to the field of art for over 3 decades as a learner, performer, guru, choreographer, director, and organizer of art. Her accomplishment in the field has been such that it could make anyone feel proud. Supriya is an engineering graduate with distinction, working for an MNC that she quit for dance. She completed a Master of Arts in performing arts at Bangalore University and topped the University winning a Gold Medal.

She is a blend of talent, grace, beauty & intellect which is exhibited in her dance performances. She has more than 400 performances to her credit on prominent platforms which have earned her impressive feedbacks & accolades from the audience & the media alike.

Supriya’s commitment to art is evident through her establishing ‘Kalamshu Dance and Music institute’, and subsequently Kalamshu Cultural Trust to promote art, artists and scholars. Kalamshu today boasts over a hundred disciples pursuing classical dance and Carnatic musical learning under its aegis. Supriya has set up an intimate performing space called “Kalachavadi” that can accommodate about 80-100 people. This stage has hosted about 60 accomplished performers of classical, folk dancers, and musicians over the last two years.
She has been honored by the society for her contributions through ‘Sri Thirbhuvana Prashasti’, ‘Prathibhashri Award’, ‘Sagar Prashasthi’, ‘Aryabhata Award’, ‘Rangashri Award’ etc. She was conferred with the title ‘Natyamayuri’, offered ‘public felicitation’ at Sawai Gandharva hall – Hubli, and ‘letter of honor’ from ‘Delhi Kannadiga’ magazine – New Delhi. Vid. Supriya Hariprasad is an accredited artist of Doordarshan, distinguished teacher and examiner for dance exams of KSEE board, Govt of Karnataka, and a proud recipient of Central Govt of India Scholarship for Bharathanatyam. She also teaches dance in a couple of schools and also has directed several dance ballets.

She is a lead dancer and choreographer of the performing team– Kalamshu troupe – which has made inroads in the realm of dance, gaining popularity & widespread appreciation. She is acquainted with dance forms of Kuchipudi, Bhangra, Dandiya, Salsa, Contemporary and freestyle.
Supriya has conceptualized, choreographed & directed several dance dramas. The dance dramas are based on the themes of mythology, folk, contemporary & patriotic, are well received for their choreographic excellence, execution & presentation. She is also involved in academic research in the field of folk and classical art forms, in particular the art forms of coastal Karnataka. Supriya was one of the main coordinators of recently concluded Rashtriya Sanskriti Mahotsav-2018, Karnataka organized by the Ministry of Culture, Govt. of India.
Overall Supriya is an extremely enlightening guru to her students, a visual delight performer to her audience, and an able organizer.

Dr. Kirthana Kunikullaya U is a trained Carnatic classical & Sugama sangeetha vocalist. She is a university topper (I Rank) in MD (Physiology) exam (Rajiv Gandhi University of health sciences, Karnataka), was working as Asst Professor at a well-known medical college in Bangalore for over 10 years. She is currently affiliated with the University of Rennes 1 as a researcher. She has completed research projects Government funded by Indian Council of Medical Research, Delhi and RGUHS, Karnataka on the impact of music on heart and brain. Her research has resulted in research papers published in several national and international arenas. She has been invited to speak on her research at prestigious institutions like JIPMER, Pondicherry, IGNCA, Bangalore and NIAS, Bangalore. The conference at NIAS was a South Asia Regional conference, co-hosted by International Society of Music Education a premier institute of UNESCO. Dr. Kirthana is one of the leading researchers in the field of music and medicine in our country.

Kirthana’s singing talent has won her many recognitions, honours & awards. A senior grade artist in sugama sangeeta, she was adjudged the Best singer at state level, winning Gold Medal, honored for best talent by Delhi Kannada Sangha – New Delhi, felicitated at Savai Ghandarva Hall – Hubli, won the prestigious ‘Aryabhata Award’ for excellence in Sugama Sangeeta, sung for a couple of cassettes and an invitee at ‘Yuva Kalavidara Samaavesh’ conducted by Dept. of Kannada and Culture.  She has been a Graded artist in AIR. She is a recognized teacher & examiner for music exams of KSEE Board, Govt of Karnataka.

She has rendered her voice for various dance performances. She was one among the chosen artists in the musical feature on ‘Mysore Composers’ lead by Prof. Vid. Nagamani Srinath at Jaganmohana Palace, Mysore & Malleshwaram Seva Sadana, Bangalore. She has attended various workshops to enrich herself including that conducted by music stalwarts such as, Sri Raju Ananthaswamy,  Vid. Nagamani Srinath, Vid. R K Srikantan etc. Her skill is being further embellished under renowned gurus Vid. Srinath Chakravarthy & Vid. Nagamani Srinath.

Kirthana has lent her time to volunteer and co-ordinate SPICMACAY’s 1st International School Convention held at DPS North, Bangalore in December 2017 for which she designed an informative poster of the map of Arts of India called “Treasures of India”. She also co-ordinated and co-organized Rashtriya Sanskriti Mahotsav 2018 organized by Ministry of Culture, Govt. of India and SZCC, Thanjavur.

Her love for music has never distanced Kirthana from music despite her busy and hectic schedules. She always finds time to train young aspirant singers. She is known for her meticulous & principled training of her disciples in music. 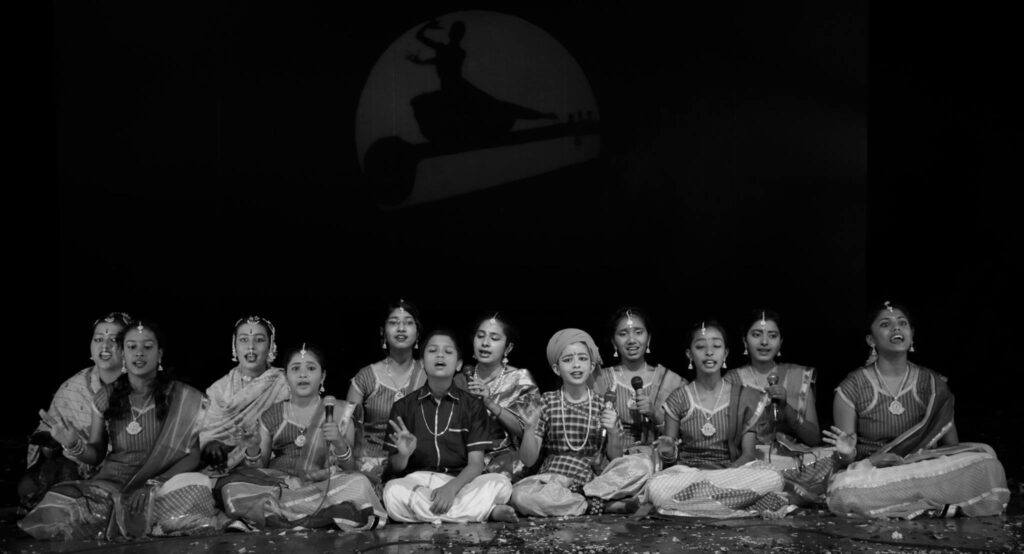